The Trump administration will end billions of dollars in payments to insurers under the Affordable Care Act program, but President Donald Trump has privately told at least one lawmaker that the payments may continue if a bipartisan deal is reached on heath care, according to people familiar with the matter on Capitol Hill and in the health-care industry.

The White House in a statement Thursday night said that based on guidance from the Justice Department, the Department of Health and Human Services has determined there is no appropriation for the payments and the government can’t lawfully make the payments.

The Department of Health and Human Services was even more direct, saying the payments “will be discontinued immediately” and citing a legal opinion from Attorney General Jeff Sessions.

“We believe that the last Administration overstepped the legal boundaries drawn by our Constitution,” acting HHS Secretary Eric Hargan and Seema Verma, administrator of the Centers for Medicare & Medicaid Services, said in a joint statement. “Congress has not appropriated money for [the payments], and we will discontinue these payments immediately.” 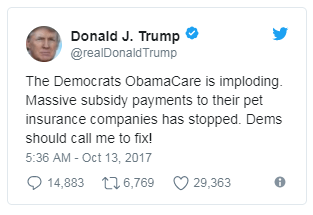 Mr. Trump told at least one lawmaker Thursday that he is feeling pressure to end the payments, known as cost-sharing reduction payments, because they are the subject of a lawsuit, according to the people familiar with the matter.

The administration is scheduled to update the court on the status of the case on Oct. 30.

But, according to these people, Mr. Trump also told the lawmaker that he would support preserving the payments if a bipartisan deal being led by Sens. Lamar Alexander (R., Tenn.) and Patty Murray (D., Wash.) comes together. The senators have been working on legislation that would maintain the payments to insurers, which Democrats want, while also meeting a Republican goal of giving states more flexibility in how they implement the ACA.

The White House had earlier suggested Mr. Trump wouldn’t sign such a deal, but his comments Thursday suggest he has changed his thinking.

Democrats responded angrily to the announcement. “It is a spiteful act of vast, pointless sabotage leveled at working families and the middle class in every corner of America,” said Senate Minority Leader Chuck Schumer (D., N.Y.) and House Minority Leader Nancy Pelosi (D., Calif.) in a joint statement. “Make no mistake about it, Trump will try to blame the Affordable Care Act, but this will fall on his back and he will pay the price for it.”

The fate of the payments, which allow insurers to offset subsidies to low-income consumers, has been the subject of intense speculation among insurers and in the health-care industry more generally.

Insurers have said they may exit the ACA exchanges, or marketplaces, in 2019 if the payments are discontinued, or possibly raise premiums further.

The payments have been made on a month-to-month basis, with the next distribution expected around Oct. 21.

A number of insurers have said they were worried that Mr. Trump would end the payments this month because a Republican effort in Congress to repeal much of the ACA and replace it with a more conservative approach recently collapsed.

Mr. Trump’s interest in the bipartisan talks reflects his desire to make changes to health care that appeal to both parties, people familiar with his thinking said. The president has also reached out to Mr. Schumer about a bipartisan path forward on health care.

A federal judge in 2016 ruled the cost-sharing payments were improper after House Republicans filed a lawsuit in 2014 to block them, arguing that they hadn’t been approved by Congress as necessary. The case has been in a holding pattern, with regular updates to the court every three months.

Mr. Trump had warned the payments would be halted after Republicans in the Senate failed in their attempts to overturn the ACA.

Thursday’s developments put further pressure on Democrats to make progress on the bipartisan talks, which some Republicans have also backed as a way to help shore up the individual insurance markets and give states more flexibility in the ACA’s implementation.

A final deal on the bipartisan talks is close, according to some of those involved. Ms. Murray made a number of concessions requested by Republicans just before the last proposal to repeal the ACA was pulled.