In Start to Unwinding the Health Law, Trump to Ease Insurance Rules

President Donald Trump is planning to sign an executive order Thursday to initiate the unwinding of the Affordable Care Act, paving the way for sweeping changes to health-insurance regulations by instructing agencies to allow the sale of less-comprehensive health plans to expand.

Mr. Trump, using his authority to accomplish some of what Republicans failed to achieve with their stalled congressional health-care overhaul, will direct federal agencies to take actions aimed at providing lower-cost options and fostering competition in the individual insurance markets, according to a Wall Street Journal interview with two senior White House officials. The specific steps included in the order will represent only the first moves in his White House’s effort to strike parts of the law, the officials said.

By boosting alternative insurance arrangements that would be exempt from some key ACA rules, the change would provide more options for consumers. But health-insurance experts say it could raise costs for sicker people by drawing healthier, younger consumers to these alternative plans, which could be less expensive and offer fewer benefits.

The executive order—which Mr. Trump plans to unveil in a signing ceremony in the Roosevelt Room Thursday, surrounded by cabinet officials and employer representatives—will aim to expand access to plans that let small businesses and possibly individuals band together to buy insurance. It will also lift limits on the sale of short-term insurance, which provides limited coverage and often appeals to healthier people. And it will seek to expand the ways in which workers use employer-funded accounts to buy their own insurance policies.

It will be months, rather than weeks, for even the most simple changes in the executive order to take effect, and the order leaves key details to the Labor Department, in particular, to determine after a formal rule-making process, including the solicitation of public comment.

But taken together, the instructions will amount to a reversal of the broad ACA approach, which seeks to guarantee that insurance policies offer a minimum level of benefits to all consumers regardless of their health history. Mr. Trump and other Republicans argue that such rules must be relaxed to bring down premiums, especially for healthier people who have seen costs rise under the ACA.

The order also will set the stage for potential future action, as Mr. Trump weighs whether to stop enforcing the ACA requirement that most Americans obtain insurance, for example, and whether to keep making payments that let insurers subsidize lower-income consumers.

And in a surprising move, the White House officials also said Wednesday night that the order would direct agencies to study and issue a report on federal and state policies that could contribute to rising health costs—including, potentially, the impact of health-care provider consolidation.

Health analysts predicted that Thursday’s order could tempt critics to pursue legal challenges, opening a new front in the health-care battle. But the order is likely to leave much of the implementation details to agencies, senior White House officials said Wednesday, and they said they didn’t believe the order could be litigated.

The action marks the biggest change to health care since the November election. The ACA, also called Obamacare, made sweeping changes to health insurance pricing that made insurance newly accessible for lower-income and sicker Americans, but also resulted in market turbulence and higher premiums for healthier and middle-income people, in particular.

Republicans’ effort to repeal the ACA collapsed in Congress last month, and Mr. Trump hasn’t hidden his displeasure at GOP leaders for that failure or his desire to step into the gap. The White House officials said Wednesday night that the order was specifically crafted in the context of the failure of the repeal bid.

“Since Congress can’t get its act together on HealthCare, I will be using the power of the pen to give great HealthCare to many people – FAST,” Mr. Trump tweeted this week in signaling his intent to issue the executive order. 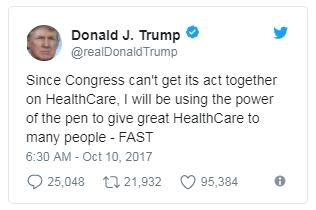 Democrats, however, warned the order could cause turbulence in the insurance market and overlooks the complexity of the health-care system. “It has the potential to be very disruptive,” said Rep. John Yarmuth of Kentucky, the top Democrat on the House Budget Committee. “I don’t think the insurance companies are prepared to actually deal with that.”

The order will direct the Labor Department to take steps that speed the way for small businesses, and possibly individuals, to band together in arrangements called association health plans. These insurance plans would be exempt from some regulations, such as the requirement that they offer a specific set of benefits and they would likely attract those with limited health needs.

The final decision about how far to expand the definition of an association and its members will be left to the agency, after a period of public comment, the two White House officials said. The officials said they supported a more expansive view of who might be considered to be eligible to sign up, but weren’t prescribing a specific legal definition—a significant factor in determining the impact of the change on insurance markets.

Supporters say such health plans can costs less, since they wouldn’t be subject to as many regulations. But critics say that leaves consumers at risk if they wind up with expensive health conditions that aren’t covered.

Currently, these self-insured health plans are typically led by trade groups that are subject to state regulation, but agency moves following the Trump order would free them from many of those rules.

In another move, the executive order will call for expanded access to short-term health plans whose availability was curtailed by the Obama administration. These plans have more flexibility than others allowed under the ACA, such as an ability to refuse coverage to people with pre-existing conditions.

The Obama administration limited these policies to less than three months, with no ability to renew them after that time because of concerns they were siphoning off healthier people from the ACA marketplaces.

As with association plans, supporters say short-term policies provide more options and carry lower premiums, while critics say they would attract the healthy and leave higher-risk people in more traditional plans that would become more costly since the population would be older and sicker.

Finally, the order will direct agencies to rescind an Obama-era guidance on employer-funded accounts that workers use for medical costs. Employees who have these accounts, called health reimbursement arrangements, will likely be allowed to use them to buy their own insurance plans, something that is now forbidden.

The Obama administration blocked the pretax dollars from being used to buy such plans because of concerns that would prompt employers to stop offering coverage of their own.